About our Director – Laurie Jackson 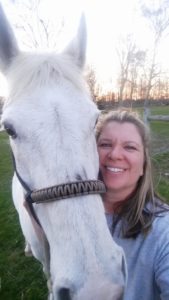 Laurie Jackson became involved in Happy Trails when she was introduced to the founder at a foster home in 2001.  She has been a long-time supporter, volunteer, member of the rescue team, emergency foster home and most recently adoptive parent.  She served as 6-year veteran dispatcher for the city of Akron and is a 9-year member of the Summit County Mounted Unit.  She owned and managed Moxie Stables in Mogadore, Ohio for 8 years before leaving it in the hands of her long-time business partner.  Laurie became employed with Happy Trails in January of 2013 and has worked diligently to learn each part of the organization as well as holding seat on the Board of Directors as Treasurer for 2 years. April 2016, she received the coveted George Award for her dedication to Happy Trails and was appointed Director of Operations following the retirement of Founder/Director, Annette Bragg.

“I am personally committed to upholding the mission of Happy Trails while honoring the foundation that our founder has set in to place.  I am honored to have been chosen to guide the organization and appreciate the support of all. I often say, I cannot do this alone, but surrounded with the skills, loyalty and dedication of the friends, volunteers and staff of Happy Trails, we can do anything.”  ~Laurie